Raven’s ragtag team thwarted an EMP attack by terrorists with Iranian nukes, but paid a terrible price. Everyone on his team was badly injured. A peaceful neighborhood was left in flames.

Raven doesn’t officially exist. People are demanding explanations, but what doesn’t exist can’t be explained or defended. Politically it is easier to deny covert agents than support them.

The few who know what happened dare not say how close America came to Armageddon. An EMP attack would have killed at least 70% in major cities. Publicizing the extent of our vulnerability would create panic.

Raven’s partner Josie, a gentle psychic with exceptional powers, is catatonic. Her mind shut down from the trauma of red, raw combat. She is gone along with their dreams of someday having normal lives.

Raven swore to protect her. She trusted him, but he failed. They were outnumbered and outgunned in their own Homeland.

From the White House to the UN, our enemies have friends in high places. Instead of targeting civilian populations, terrorists will now directly attack America’s leaders and the thin black line of agents that protect us. Remove the protectors and the sheep will be helpless.

Without Josie or government support, what can Raven do? Can he find redemption?

Readers now call my books political thrillers. Here is the Back Cover. Raven’s Redemption was given the highest praise in Bob Dugoni’s Keynote Speech at Chanticleer Author’s Conference in 2016. Link. 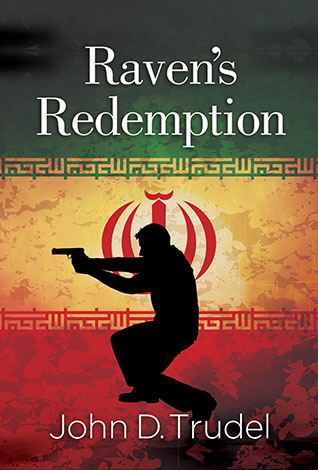 “Trudel is an author to watch. Raven’s Redemption stands out. An intelligent, poignant and tense political thriller that hooked me quickly. Highly recommended.”

“Raven’s Redemption pulls you in and makes you think: Terrorists with Iranian nukes. John’s novels remind me of political satires and future history. Some call them ‘political thrillers.’ If you like suspense on the bleeding edge of reality, take a look. Recommended.”

“Raven’s Redemption John Trudel has outdone himself in his 2nd book of his Raven Series. Looking forward to book #3. Highly recommended.”

“Raven’s Redemption has compelling characters trying to protect a weakened America in a world where jihad is ascendant. They face terrorist cells in America, Iranian nuclear weapons, and enemy agents embedded at the highest levels of our government. These things are already happening.”

“Raven’s Redemption is John Trudel’s best thriller yet. He puts the reader on the edge of his seat and keeps him there. You will wonder whether this book is fact or fiction; you will pray that it’s fiction.”